Another Saturday night, but it seems that this one will never become boring as before. Well, me and a few of my friends already bought a ticket to Fiesta Cahaya or Light Fiesta.
I didn’t know actually what this fiesta for… I know that they will be a lot of beautiful light, maybe, and a lot of dancing. It is one of the Indian celebrations, and I didn’t know actually why it is held. But it sure will fill empty Saturday night.

I hope that this fiesta is better than Pesta Angpow ( Chinese celebrations) that held a month before. And if I compare Pesta Angpow preparations is much better than this Light Fiesta. But I’m still waiting for a lot of surprise and excitement in it.

Well, to be honest, lots of my friends said that Pesta Angpow is boring…and last year Light Fiesta is sucks, thus as an hypothesis, this year Light Fiesta also must be sucks.
Light Fiesta and Pesta Angpow were held every year here in Universiti Malaysia Sabah by two differenet community that are India and Chinese community respectively. And I’m as a Malay have a chance to watch both of them. That is the unique thing about Malaysia ..ermmm… correction….Sabah! Only here in Sabah all races can live together and enjoy everything together. It is more likely that any other part in Malaysia were not like Sabah. It’s wrong to say that all races live peacefully and harmony together in Malaysia, well actually I think in Malaysia they only live together but to live harmony and peacefully we must say only in Sabah. Am I right? Anyone did not agree…than research for it. You’ll find the true. Even when I say I want to go to Light Fiesta to one fella from outside of sabah (don’t want to tell la which part of Malaysia), he said to me that Muslim cannot go that fiesta. What the heck? Muslim must be sit under tempurung ka? And even non- Sabah Chinese majority of them don’t want to go to this fiesta to support Indian Community. Well, Sabah is not like this actually but people from outside still don’t understand Sabah.

Proud to say, I’m also considered as a Sabahan ( even though I’m from Labuan- a small island near sabah that had become a federal territory so most people said that Labuan is not a part of sabah, but geographically, it is). As a Sabahan, I celeberate almost everything but I still stick to my religion but I found it is interesting to live with other religion. No religion is better in our eyes, only God knows, and please believe what you want to believe.

That night was crowded, we pay RM7 for a ticket so I hope that I will not be disappointed of it. 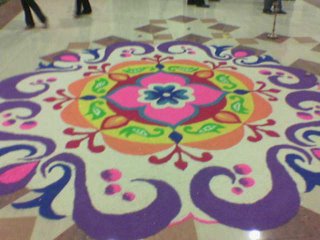 And in the entrance to the main hall of the fiesta, they are coloured hulled rice that designed into a beautiful pattern, it’s abstract but still beautiful. It is a good sign maybe. Perhaps the show will be much better than this.To shorten this story, I tell you all that I’m very satisfied with the show. This Fiesta is the Best since I joined this University. Some of my friends said that it was better than Pesta Angpow. Not to compare, but that’s the way to express what they feel that night.

Very great. That’s all I can say. The dancing, the surprises, joke, the lights, music, almost every part of the show keeps giving me more and more excitement until the end. What a great show it is. And I did not realize so much talented dancers in University Malaysia Sabah. No one can beat Indian dance. Thay culture dance and modern dance, both I like it. I don’t like to watch all kind of dance before ( my mother use to be a dancer and a dance teacher so I already boring to see people dance) but this time I stick two thumb up. Best! 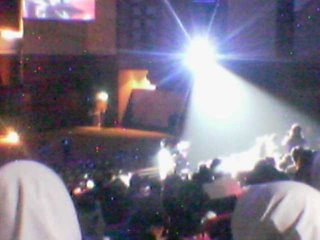 Congratulations to the Indian community that held this wonderful show. I never suspect that RM7 ticket can give me a lot of excitement that night. More than 3 hours show that did not get me boring ( except some of them such as Multicultural dance). Multicurtural dance a little boring but the whole show is great.

Hmm.. I hope later there will be more like this kind of show. Its really change my Saturday night into a colourful one. All of us went back from the show with a big smile and a lot of story to tell. 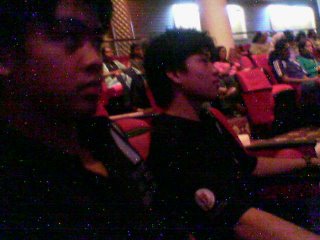 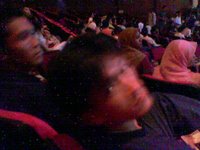 The faces of my friends enjoying the show(above) 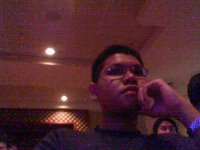