I missed System of a Down

- January 29, 2009
1. Last night before going to sleep, I was listening to my old song collection in my Laptop. I found my collection of System of A Down from their demo until their last Hypnotize album.

2. I start listening to System Of A Down when i was in form 4. They are like an underground band that would never be appear superficially in mainstream music because their music was so different. If you listen to their music for 1 seconds, then you know, this is System of A down's Song.

3. Even some of those people out there classified SOAD song as 'System' in genre. It's kind of funny, but yet it is true. They are like the pioneer of that kind of music. The founder of System genre. And until now, there is no other band that can do the same sound like them.

4. Now, SOAD is already a history. His lead singer going solo and his second vocalist (Daron Malakian) went to form a new band called Scars on Broadway. I already hear both of their music creation. Does not really differ from original SOAD. Both produced an album that sound really like an SOAD with some missing part.

5. When i hear Serj Tankian 'elect the dead' album, the missing part in that album is i think Daron malakian. And when i hear Scars On Broadway, i sense that the band is missing something. Which is maybe missing Serj tankian in the music.

6. System of a down is like a combination of 2 great song writer. They was amazing.

7. I hope that system of a down can appear again together. With new song. It would b amazing.

after that... no more System of A DOwn. 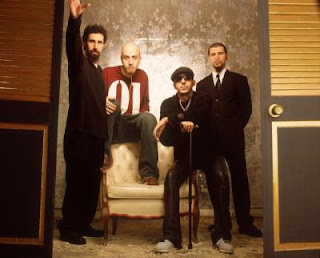 System of a down.

'Yeah. It'll feel good and happen. I can respect this situation [System's hiatus] more than I can respect the situation where two people are like, 'The lead singer fucked my girlfriend!' and that kind of bullshit. Nah, man. The lead singer is a special person to me and I am to him. And that's how we ended off. Same with Shavo, same with John. And it will always be. It was a big part of my life. We were onstage together for a long time, man. We went through shit as a band and friends -- we slept in RV's together!' - Daron Malakian
music