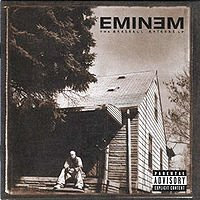 1. A lot of people asked me, why i like Eminem so much? The reason is The Marshall Mathers LP.

What is The Marshall Mathers LP

It is the second album or Eminem released at the end of 1999 nearly 2000. It was like a sequence of Eminem's The Slim Shady LP which is the first LP of Eminem. He created Infinite EP before hitting the mainstream music industry.

When we say sequence, this album was produced in the middle of Eminem's controversy all over the world with his marriage issues, assault and drugs problem.

When Eminem's first international debut with The Slim Shady LP which is his first album, everyone attack this young rapper as an annoying, violence, double faced, murderer, serial killer and everything and his music rated XXXNo one must listenXXX to describe how violence and inappropriateness of the album in human culture.

However, Eminem came back with the second album which is The Marshall Mathers LP which raised more critics and contreversy regarding the lyrics which is so full of violence, drugs and sexual issues.

Shockingly, this second album was so damn good, in fact, it could be the best hip hop album ever produced and the lyrics and song in this album was so disguisting yet brilliant making it sold out at and Eminem received multiplatinum and multi awards for this album. It was nominated for the best album of the year but unfortunately the album lost to someone i could not remember his name and i also did not the name of that old singer. Lots of people give opinion that this album should received that awards.

Why The Marshall Mathers LP became a big hit in the world?

Critics. You can hear almost everywhere this album had been critisized for its explicit content. I remember in Selamat Pagi Malaysia, a women telling the audience not to let their children listen to this album. Everyone trying to stop this album from being spread widely all over the world.

This album bring fame to Eminem. being the most notorius and also rich. I could remember how every corner of the street, people are listening and rhyming a long with this album. That is the era of Eminem i think. No one can deny that.

Why it is being critisized?

Do you ever listen to this album? If you did, you would know. This album started with Public announcement which asked people to kiss Eminem's ass and every cuss word comes in this announcement. Lastly Eminem says "Sue me!" and the whole album start.

The album first song is about Eminem raping his own mother, the second song about a fan being so fanatic killed himself by driving through the highway down the river with his pregnant girlfriend, followed by the song about shooting people in airport. Then the song of Eminem scolding his fans in The way I am. Later the song The real slim shady comes with insult to many pop artist in music industry. Then came the hard song of entitled Remember me which is about shooting people and everything….. the list go on with more violence, insults, critics to gay community, murder, and robbing a bank.. killing his own wife. Everything inside this album. So scary yet it produced a unique way of putting a song. No one every write something like this in an album..

The strength of this album

Even though this album contained lot of bad stuff and lyrics, but it is not bad stuff anyway. The beat, the genius and honest lyrics, funny, sometimes it can meka you laugh, make you angry, and make you say, you're right Slim shady. The music is taken seriously in this album. The song titled "Stan" is one of the best song ever produced in this world. Listed in top 100 best song ever produced by Rolling Stone magazine this songs sure fascinate hip hop community. The song also bring a new way of emceeing. As most of people rap about their life and their stuff, the song Stan rap in a second person view. It is actually not a rhyme of Eminem, how should I say it, it is actually a series of letters narrated by Eminem who supposed to be a big fan named Stan. The 3 letters than joined together with bridge of Dido chorus producing a story which is so interesting to be listen to. This song sure bring a fame to Eminem. After this song is widely aired in radio, people start calling a fanatic fan as stan. It became a new word.

Everyone must know The real slim Shady song in this album. This song consist of the most catchy lyric ever in history. You wouldn't believed me? How many people did not know Eminem when you sing "The real slim shady Please stand up, please stand up!". Everyone knows this song. It won multiple awards in Grammy.

All other song is worth to listen. Another song that is so unique in this album is "Kim". A song called Kim. When you listen to it, you would not consider it as a song because it is more like an argument between husband and wife end with the husband slitting the throat of his wife. Very violence. The song end with a sound of body drag into a car trunk. And this song is actually prequel to the song called Bonnie and Clyde 97 in Eminem previous album The slim Shady LP. This song is so unique and every hip hop fans should listen to it even only for once. No other songs in this world are like this song.

Why do I listen to this album

My friends lee wai hong lend me this album. I listen to it once, I was fascinated, excited and sense the unique of this album. After listening to it, I became a fan.

If people consider themselves cool enough to be a hip hop, well listen to this album first and you would feel inferior because of it. I gave this album 10/5 stars and this is the best album I ever listen to up until now.

I would gave an advice that everything you are listening in this album, please don't accept it in reality. It is a bad thing to do. Let the album be the album to entertain you and do not follow anything.

Now Eminem is selling out his new album called relapse which I found is ok and bring the same character as he is in The marshall mathers LP, but it is not enough to beat this album.

Give a listen and you judge for yourselves.