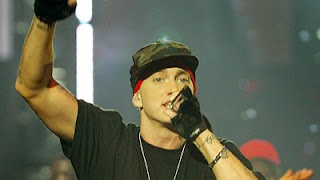 I'm relieved because my judgement on this album is by far correct. I've listen to it many times.

-Comeback eminem has claimed the top spot on the U.K. album charts - becoming the fast-selling release in Britain this year (09). - Contactmusic.com
-Not only does Detroit's favorite son claim the top spot of the week, the tally will be enough to score him the biggest opening sales week of 2009 so far, besting his interscope labelmates U2, whose "No Line on the Horizon" sold more than 480,000 copies earlier this year.- hitfix.com

-According to chart reports issued Sunday, Eminem's "Relapse" is no.1 in the U.K. and also becomes the fast selling album to date this year. - Singersroom.com

-Eminem’s Relapse skyrocketed into the number 1 slot and Green Day’s latest album 21st Century Breakdown came in at number 2. -thewest.com
-Eminem's comeback album Relapse has stormed to the top of the UK charts, becoming the fastest seller of the year so far. - news.sky.com