When we arrived at Jong Crocodile Farm the first shocking things that we had to pay Rm16 to enter. In the internet, it says that the entrace fee is Rm10 and what we found there, RM10 is only for sarawakian. No student price, and other Malaysian other than Sarawakian will have to pay RM16. What? I got a cheaper price for a same place like this in sabah.

Rm5 for student in Tuaran Crocodile Farm in sabah.

I was a little restricted economially now, so Rm16 is really inappropriate for me.

Anyway, we did pay the entrace fee since we already went that far. So what is so interesting about this crocodile farm. below are the things i noted:

1. they have that big Bujang Senang skull, it's historical.

2. They have a lot of crocodile, i think much more than Tuaran, i don't know about Sandakan.

3. They have a really big crocs there. Honestly, when i saw that Crocs coming our from the pond, it was so creepy and scary. So big. Twice my size.

4. They have jumping crocodile...well unfortunately, all the crocodile were lazy to jump. We wait almost 20 minutes and none of the crocodiles jump. That is pretty sucks.

Other than that, nothing special about this farm until they have to charged Rm16 for a person.

To say worth it or not. I would say...not worth it. Think twice before go.


p/s: We went to Semenggoh National Reserves later to watch orang Utan, that place is much more better. So beautiful, and only cost us Rm1.50 for student price. RM3 for non-student. 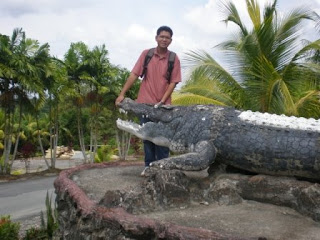 This picture me and the crocs. So big, this is bujang senang i think. 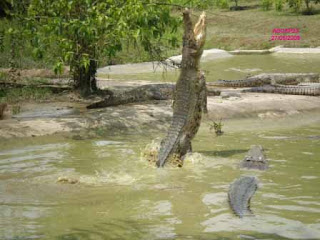 This is jumping crocodile i'm talking about.