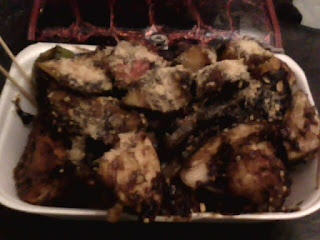 And this is Rojak. A rojak that i ate just now at Wisma Sabarkas, top floor Kuching Sarawak. Anything special? No obviously since Rojak can be found anywhere in Malaysia. However, as a Labuanese, and also a bit Sabahan and Sarawakian maybe later, I would like to highlight about the word Rojak as a lot of people actually did not know what rojak is.

Let me tell some story. I have lot of story to tell. Just listen to it. Don't like it and don't listen. No one need to read everything that i wrote here. So the story goes like this. My mother love to eat rojak. Poor her, living in Labuan and sometimes go to Sabah, when she order Rojak in Food stall, she usually got served with Gado-Gado. Gado-gado is a type of noodles with peanuts sauce and it is actually so different from Rojak.

Why this thing happen? This is because, Sabahan did not know how Rojak look like or maybe because of the word evolution, suddenly Gado-gado become rojak. I don't know why is that happening. They must be some story behind it.

When i get back to Labuan a few weeks ago, I accompanied my mother to the town and she bought me breakfast. And my mother asked for Rojak as usual and she was served Gado-gado without noodles. What is happening? Even a Labuanese did not know what rojak is. This is humiliating.

I'm a labuanese, my mother too, why do we know about it? This is because we both enjoyed watching TV. That channel called AFC. From there we can see people eating Rojak in Singapore, Penang, KL and wherever else in peninsular Malaysia.

It is funny you know when people did not what is Rojak. Rojak is a kind of food where you yourself can choose whatever you want including fishcakes, cakes, fruit, and anything you want, everything is mixed together with some sweet sauce made of something (i don't know) and that is why it was called Rojak. Mixed together.

I love to eat rojak like this. If i cannot eat it in sabah, where you cannot find real rojak, i can at least eat it here in neighbouring sarawak. I hope someday, real rojak can be found in Sabah. And when it does, i don't know what sabahan will call it since rojak already spesific to gado-gado over there. haha.
Ascap23 4th June 2009.

p/s: There is a lot of food i have not try in Sarawak. Example real mee kolok. Under the bridge they say. How to go under that bridge?
food entry