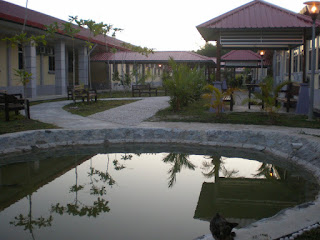 This place is beautiful. I was there when i'm doing my ever tiring community medicine posting. 2 months living there was a very great experience. I miss that place. Even though we don't get a long actually as a group, too much fighting and arguing but no one dare to pull a trigger to start a conflict like what happen in Kuching (being honest). Everyone keep everything to themselves and just wait until the program finish. Eventhough, a lot of gossip there, kutuk2 and ngumpat2 behind. However, i guess we manage to finish that posting as a group, no matter how much conflict we had, in the end everyone try to suppress their feeling to put the job done.

This is not the problem here. The problem is a lot of people asking, whether the ghost story in Kudat is true or not. I'm sure that my junior is doing the community posting there right now. I did not want to talk about this ealier because i like to keep it until i leave that place and give me some time to think about the logic and reason behind the incident.

What happen to me..was in the first 2 days of my life there in RMEC. I was sleeping very tiredly and tightly until the around 3 AM in the morning where something strange happen. It was not that strange. It was just a knock at my door. At that time, i was thinking one of my friend was knocking my door asking for something at 3AM IN THE MORNING! I was so lazy so i did not bother to open the door.

Half and hour later, the door knocked again. Hard. I woke up again, and wait for a few minutes and look at my watch. 3.30 AM. Who the hell dare to bother me at 3.30 AM in the morning. After a few minutes, the sound disappear. I continue my sleep.

The morning after, with my stress-on-someone-knocking-my-door-last-night face, i asked all my housemate. "Who knock my door last night?"

Everyone simply answer, don't know. At first i was thinking that they are pulling some jokes on me. However, from their facial expression and also their consistent answer, i started to have a goosebump. If no one knocked the door,and who the hell knock it?

I remember i was so silent that morning until i arrive at Kudat Health office. I was thinking about the logic of the story. It seems that i am the one who are lying here.

That is the part of my story. There is other part from my other housemate. The truth behind their story i did not dare to confirm because they experienced it and not me. What i experienced is totally true.But what others had. i don't know.

Okay, let me just tell it. One of my housemate, at the same time, 3 AM, two days after i had my incident, was hearing a voices of people shouting and talking from the living room while no one is there actually. I did not heard that. Others also. Only that one person did.

Other story is about an object standing beside his bed at the middle of the night. Dream or true, i don't know.

Other story from security guard of that area said that he saw a man walking through the gate and disappear.

I'm not sure about the authentic of all of this story.

There is a story from the people who lived near that building. They said that the building site was actually quite known for the haunted story. That place was a deep jungle but then UMS came and demolished all the tree and built a big building. Some of the villagers said that there is incidence of the builder of the building met a 'pontianak' and also 'babalan' (flying head) around that place.

Sometimes people tend to make a story from story. Maybe someone only saw one thing strange, but the story came up with thousand or ghost army in that place. I guess not all of them are true. I'm a skeptic of paranormal activity. I do believe it but i tend to give more scientific and logical explanation rather than going to the unexplained explanation. I did encounter with ghost twice in my life but not the one like in 'The ring" or Ju-On but something like i experienced in RMEC.

Maybe there is person who knock my door that night. But i am sure that i am not dreaming because i woke up and i feel that anger feeling because someone is bothering me ( i thought my friends are bothering me).

Maybe ghost did exist. We don't know. In my religion (Islam), we are taught to believed on those Jinn and Syaitan. But i'm sure that both of them did not go around and eat and kill people. Human kill. Not them.

If jinn was causing this disturbances in RMEC, it could be quite logic. haha. Why?

RMEC is a big site consisting of 2 block of staff aparment. 3 double storey houses for the lecturer, 2 block of lecture room and class room (around 5-6 classroom), 5 terrace house for the student (one house got 10 bedrooms), a big volleyball court, futsal field, and a big hall. One block of storage room also i think.

But how many people live in that big place? Only 2-3 house on the two block apartment were occupied. The lecturer houses only occupied when the lecturer come there to give lecture. All the classroom is not used currently. Among the five houses for student, only 2 were used, and for one houses with 10 bedrooms, only 3-4 bedrooms were used. How many unoccupied places there.

Eventhough not ghost live in those unoccupied places, i guess, rats, cats, tiger, snakes, and anything can be there and haunt you everynight of your life in RMEC.