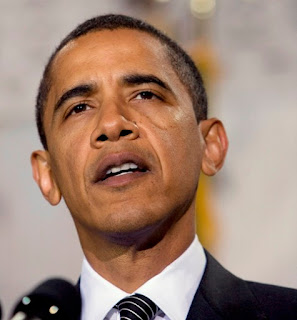 55 minutes of live speech in Cairo, Egypt, in my opinion without considering which religion i am, i can this person really know how to speak. He i a good speaker. I think that is why he reach what he is now today.

When i speak like this, I suppose a lot of people out there would say that i am not a real muslim because i praise a non-muslim leader. But this is only for mind who is so closed into one aspect of this beautiful world Allah created.

Okay, well, i don't want to be serious all the time talking about details of the speech Obama made. It is just interesting to listen to. He is honest talking about his early life in Indonesia, he also honest saying that his father generation is a Muslim. he live in different Muslim country before settling in America, something like that. I think he is much better than the previous president of America.

The point that he is highlighting also neutral in nature. For example, he would say Palestinian should stop attacking Israel, in the same time he talk about palestinian who suffer for 60 years and he said that Israel is violating the agreement of not expanding their territories. So it goes both way.

What i want to say here, i guess if all people are in the middle, trying to make a better peace world, this world will not be like this. But i don't think so this will happen. Why?

Maybe Muslim agree want to have a peace, but non-muslim would take advantage on attacking them. And when non-muslim want the peace, Muslim would say, we are the true religion, let's take over this world. Something like that. So the war will not end.

I guess the solution is not to think who is right and who is wrong here in this world. You don't need to say those people will burn up in hell and vice versa, what you need is to let them be them and try to make better thing for everyone.

2 I serve not what you serve,

3 Nor do you serve Him Whom I serve,

4 Nor shall I serve that which ye serve,

5 Nor do you serve Him Whom I serve.

6 For you is your recompense and for me my recompense.

From what i understand, it's like letting them be them. So, you did not need to push a war to others.

I'm a little ashamed when Obama quoting Koran sentences showing how Islam called for peace but Muslim keep saying that the war is JIhad we should support it.

I guess if you read the history of Prophet Muhammad, you will never see his war like the war today. All he did is a war of defense. And he did not and will not attack if the enemy did not put a step first. As you read in History, Prophet Muhammad frequently send a person to negotiate with other empire's ruler asking them to convert to islam or if they did not want, they at least should support or have diplomatic relationship with Islam.

He did not send person to kill, or ask army to go an attack a place.

Some of the person he send was killed, and then he will move the army but never attack blindly. Always negotiate and negotiate. Never attack when person is in sleep. never attack women, children and innoncent people. Islam is really for peace.

So what Obama said, make sense. Don't say he is a christian and what give him right to talk about Islam. We should say, why there is no Muslim can talk something like that. I believed there is so many of them but the media, as you know, only show stereotype muslim who would hold a gun and a bomb in their hand running and saying "fuck america". Media also play important thing in War.

I guess a big dialog with Muslim, christian and Jew to find a way of solution is one step to end war between religion. We are all actually from the same root.

Christian pray for Jesus, Jew is from Moses, and Islam from Prophet Muhammad. All of this from Abraham. For somebody who did not know history, This three religion is called Abraham religion or (Ibrahim).

And people fighting for Masjidil Aqsa, this place is actually holy for all of Abraham religion so everyone deserve their part. No one has the right to destroy it.

And for Muslim, this place is where Prophet Muhammad pray and meet with Abraham, Moses, and Jesus. The Isra's Mikraj could be sending us some message that we don't want to know until today.

And the history on battling for masjidil aqsa did not started during Prophet Muhammad era. It came after that. Way after Khalifa harun ar-rasyid period.

i don't know the opinion for other muslim. The vision to create a peace in this world is what i agree on. And if you listen to Obama speech, he could be having the same vision. Not necessary a Muslim only had that kind of vision. Everyone have the same vision.

But still i think, one representative from Muslim World should hold a speech like this.

As you know, Muslim World previously have one leader. But after power, hatred, money and self fishness poison our history after the Death of Prophet Muhammad, Muslim world is not united until today.