- November 30, 2009
Ok, instead of reviewing one movie at a time like i use to do, this time i will make it three. Supposed to be 4 but i really don't want to comment on Christmas Carol.

The first movie i want to review is Twilight New moon. 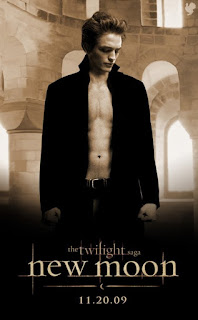 This movie is so 'scary' as i can see that girls can kill for this movie, can break up with their boyfriend for this movie and they can do anything for this movie. Girls power are proven as this movie gain a millions on its opening day. 'Scary'.

So, in term of stars, i gave this movie 4 over 5 stars! Not bad. The story is flowing easily to be digest and the quarrel between wolf and vampire, it is like watching the other part of underworld ( a movie released years ago showing the war between the vampire family and werewold family). I would say the story is much influenced by Underworld 1 and 2. Why? Is the writer a big fan of Underworld? It is the same thing in underworld where vampire have classy family and werewolf are normal punk kind of guy.

Well. forget underworld, this movie is worth to watch. No wonder people crave it. And no wonder girls like it, because lots of sexy body showed in the movie. They even slow motion it. damn exploitation of male. Male should make a protest or whatever because we are exploit by female now. haha.

However, the most irritating part of this movie is the ending. Don't want to tell you all about it. Who ever saw this movie, you must realize that the ending is sucks.

Still, one great movie for this season.

I never plan to watch this one. The trailer is not convincing enough to show whether this movie is good or not. I watched it though, because everyone is saying this movie is the best or whatever.

Well, i gave 2.5 over 5 star for this movie. Too much idiocy. This movie does not even make sense.

The movie started good showing the legend of ninja and some flashback of ninja training. As it developed, too much nonsense has enter the storyline. World goverment want ninja to be killed? Ninja attacking the goverment high security building? Rain (as raizo in this movie) is captured and tied inside a monitored cage or something? What is this? What kind of story is this? I just love to watch the flashback because it is more emotionally driven and rationale compare to the present storyline.

It is like war between gun and ninja.. what the hell? Why goverment need to attack ninja in the end if ninja is really a secret society? What evidence do they have as earlier they said ninja don't even existed because there is no proof.

The story becoming more nonsense and nonsense until the end.

For the figthing scene, hmm,, lame. Everyone can do that kind of stuff ( i mean the choreograph). It is not beautifully crafted. What is the different between looking at a movie where the actor use gun to kill and ninja as in ninja assasin use to kill? Not really much fighting but more to throwing and cutting. Blood everywhere. You can't even see what is cut there. Only blood everywhere.

And a ninja can heal themselves like they have some sort of ability? Should throw that part away. No need to put this stuff in the our modern world movie.

However, salute to Mr.Rain as he is really putting much effort in this film. If you realize, only he in this film who act seriously compare to other actor and actress. So, respect for him. I think he has a bright future in hollywood movie.

Anyway, if you like blood ( like you are a vampire or something), watch this movie. make you thirsty. It is like kill bill but more like kill bill in the dark. So many blood everywhere.

PS - Why is it only the hero been trained as a ninja and other only as a sidekick? Where is that Ninja based exactly? How come a ninja is a korean? How come everyone of them are speaking english. Does Ninja in japan really speak english only?

Have you seen this girl before? Do you recognize her? Maybe you do maybe you are not. She is the girl who star in the last movie called Chocolate or 'Fury' here in malaysia. During that time, he act as a mentally challenged girl who can fight, and this time, as a lonely girl who can fight.

She does really can fight well. This movie does not have that much promotion as other movie from hollywood. Yes, if you all did not realize, you are all brainwashed by hollywood, by this time you cannot even watch movie from asia because your brain region for that has been deleted. Or simply you are too proud to become a westerner while actually you are living in Malaysia and your english is broken.

I also does not really attracted to watch this movie, but i watched it anyway, i am movie mania. And i could not believe that this movie is not that bad, and it is much more better than ninja assasin. If you watch Ninja assasin fight scene and you are stun by it, then watch fighting scene in this movie and you will have sudden cardiac death.

The choreograph of fighting scene are beautifully crafted as in Ong Bak, Tom Yam guong and Fury. I think the fighting scene in this movie is better to compare from the previous same genre or thai martial art movie. And to compare it with hollywood, or hongkong movie, jackie chan, jet li, you named it, nothing can beat this movie.

All the move during each fighting scene is impossible to imagine. You would never know that kind move is possible to be use in martial art.

I gave this movie 4 over 5 start plus 1 moon because that girl really know how to spin and jump and many stunts are performed by herself. So i guess for my review today, this movie win it by 1 moon. Twilight does not even get a moon from me. haha.

So that is the conclusion of my review. I don't want to talk on the storyline of each movie because it would not be fun if i do that. You should watch it first than agree or disagree with me.

That is all for now. Please stop idiocy.