- January 29, 2010
1. Two greatest movie i ever saw, a few months ago i would say Transformer but i could not deny despite many crititcs that Avatar was a great movie after all. It is the only movie that i can afford to bring my girlfriend to watch twice. Other movie... it would be a waste she said but Avatar was specifically requested to be watched twice. haha.

2. But I'm talking about Malay film review right now so for Malay Movie, the best that i ever saw, now i would say.... hmm...still Papadom. This is rather a weird introduction. The reason is, i do not want to make a review regarding this movie called Adnan Sempit but eventually i was attracted to give my opinion when i saw the highlight stating that this is new box office record in Malaysia. I am not shocked but i will still choose Papadom as the best if they ask me to choose. 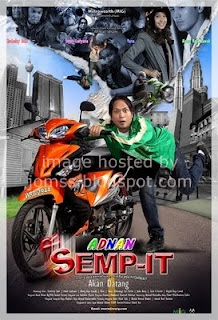 3. This movie for me is only a simple movie, simple story line, stereotype of Malaysian movie, and there is nothing too interesting about the plot. I would term it, predictable as usual. I know the end, i know how the process of ending would come, since the middle part of the movie. (in the beginning obviously i don't know what the hell is this movie is all about).

4. The good thing about the movie is the comedy. I am pretty sure that people would never stop laughing watching this movie. I am not an easy to laugh guy, i watched Pisau cukur with a coarse facial expression through out the movie. haha. There...i laughed. Adnan Sempit did well on this. The jokes was fresh. However, what is lack there is, the integration between the jokes and the storyline. It is seem to be a little obvious that the jokes is not necessary. 5 minutes story, then 2 minutes "sure-laughable" jokes which does not really correlates with the story. This seem to be the one of the weakness of the movie.

5. The actor and actress, i gave them 2 thumbs up. Their performance was top top in this movie. I don't know but they are all really comedian. Even their faces are laughable. Sorry if that is too much. But this means that they put a lot of effort into their acting.

6. Ending... mamahuhu. So so. Ok lah. Not too bad. But i don't like the way the movie end. Just by breaking through a big company meeting with a beaten up guy as an evidence..? Common, even Malaysian would not do that, we are too civilised to accept kesudahan like this.

7. The messages, is what i really don't like in this movie. It is confusing. Not to say i am confuse but i can sense that there are intention of making people accept Mat Rempit at the same time saying showing the bad thing about Rempit. So what la? The message is not clear. Several times they say that not all Mat rempit is like what portrayed in media but everything shows in this movie i believe not a good thing also. So where is the good thing about them? Confusing.

8. So in the end, it is a worth it movie to watch but, it would not become the best Malaysia's movie. If it beat Jangan pandang Belakang in box office record later, it is quite a good news for them but to be the best movie is yet far to be achieved.


9. For everyone who have not seen this movie, please watch it and support our own film. I would not critic to make people stop from watching this movie but rather just to discuss my opinion. So if you gave me a scale whether you want to watch it or not, i would say watch it. You will not regret to laugh for 1 and a half hour to relieve your weekly stress.
malaysia Movies