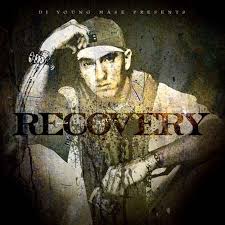 1. Slim shady is back. After a year of waiting, i finally has a chance to listen to his sequel of the previous Relapse album that was released on 2009. Some people say that this is the most anticipated hip hop album of the year. After a year of announcement on its released, finally the album is here.
2. When i hear his previous Relapse album, i was a little disappointed since the flow and Eminem's style totally change and sound a little rubbish and boring, so i hope Recovery won't follow the step of Relapse.
3. Luckily, it does not. This new album reveal a brand new style of Eminem fused with his old angry lyrical style, honest, but he is much better controlled than last year. No more song for dissing a lot of pop celebrity or many call it as " Please stand up song". All the song in this album is much more honest than before.
What is good about this album?
4. The good thing about the album is, the lyrics is much stronger than before, and the way Em deliver it is much more clearer than what he did in last Relapse album. The music is different as eminem try to fuse a lot of ballad kind of sound in his lyric and a lot of new thing to be heard inside this album. from track 1 till the end, every song is reasonably listenable. Of course some of the song is just lyric and nothing special, but there is a lot of thing that worth to hear inside the album.
The strongest song?
5. Everyone heard Eminem new single called 'Not Afraid'.. the song is different yet still show Eminem way of rapping. he lyric is strong enough. However, i found that his song entitled " love the way you lie" featuring Rihanna is equally strong as Not Afraid. I believe this song is written no.1 all over it. Other song such as Space Bound, No love featuring Lil wayne, Won't back down feat Pink, 25 to life, Going through changes feat Ozzy Osbourne and So bad, is unique hip hop song.
The not good song?
6. I can say every song is reasonably listenable but, yes, there is some song that i think should not be there in this album. This is especially for the song entitled 'You're Never over' which is dedicated to his late friend Proof. This song is, maybe, be putted inside this album because it was a dedication to proof, but it was totally rubbish song.
A song called Cinderella man is quite unique, however, it is sucks. It sound ugly. Maybe too new to be good.
So that's it about this album. Only a brief. You should and buy it on your own. And for your information, the album will be released next week. So please be patient. I am definitely go and buy this album.
Here is the song list from this album:
1 Cold Wind Blows
2 Talkin’ 2 Myself feat. Kobe
3 On Fire
4 Won’t Back Down feat. P!NK
5 W.T.P.
6 Going Through Changes
7 Not Afraid
8 Seduction
9 No Love feat. Lil Wayne
10 Space Bound
11 Cinderella Man
12 25 to Life
13 So Bad
14 Almost Famous
15 Love the Way You Lie feat. Rihanna
16 You’re Never Over
eminem music