Showing posts from February, 2012
Show All

A picture tell a thousand story 1 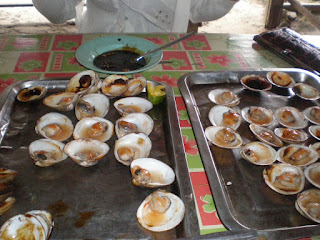 A picture can tell a lot of story. When i look into my hard disk, there is a lot of random picture that i took, most of it during my student time before i start working. Guess after i start working, life becoming the same everyday and not much picture need to be taken.

This picture was taken on my final momment in Medical school. This is 'Lokan bakar' or in english i guess i can call it Grill clam or something. This cuisine can be found near Sulaman area Kota Kinabalu just before we reach Karambunai Resort. Before the roundabout to Karambunai or to Kudat if i am not mistaken.

When i took this picture, it was the last time i ate at that place. My girlfriend insist of going there as we never had the opportunity to go there before. Thus, after our final exam, we went there and ate those clam. It us just a plain claim burn on top of open fire, and it is served best with chilli and coconut puding.

- February 10, 2012
I've been doing some reading on dream. I love dream..not dreaming per say. I love the physiology of dreaming. Yes, it is true that previously people classified dream as a psychological phenomenon but now it is proven to be physiological phenomenon and it is still mysterious until today.

No one can explain dream but we know how it happen but we do not know why it happen.. and i love to think about it. And every time i had a dream, i always think about it back. Not to believe it like some lunatic people do, but i love thinking about the nature of the dream.

This is a few thing about dream that i realize when i think about it back.

Before that, dream is actually a phenomenon that happen during our NREM and REM sleep. Both stages of sleep here produce different kind of dream. Some scientist believe that NREM sleep produce more positive emotion or dream and REM sleep produce the opposite. People who dream a lot in REM sleep tend to have some kind of anxiety and depression. It is a theo…
Post a Comment
Read more

Learn Your Way of Driving in Kota Kinabalu

- February 05, 2012
Ok..today i am pissed off with a jerk whom think that he is the right one while there is a clearly evidence that he is a jerk. Looking at his face, written there on his forehead IM A JERK AND STUPID.

This happen just now when i was driving to 1borneo. For everybody information, that road i am using, is the road that i use everyday to work.

So the story began like this. I was driving like usual, i can close my eyes also cause i know the road really well. I was in the 2nd left lane. On my right was a toyota hilux goint to enter the rou…
Post a Comment
Read more
More posts