The Avenger is Iron Man 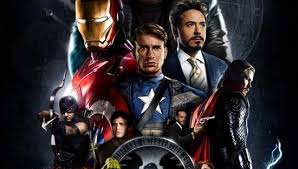 Maybe it's the iron man. He is the one who can light up the whole avengers thing.
\
This movie, to tell the truth, may not be the best superhero ever, but it is sure a nice and you will miss something if you did not watch this movie. After all the franchise movie regarding the introduction of avengers, i can say this movie is one of the best after the iron man movie.

Iron man is, i guess, the best superhero ever created. He act like a normal billionaire human being, he never hide his identity, he is just plain human that have super powers. I love iron man movie. The previous two movie of iron man is superb. The rest.....hulk...I can accept the 2nd film not the first one. Thor....lame. Captain america....super lame. But when all of them put together with iron man, it can still be the best.

The film consist of two and a half hour action packed type of movie with lots of slapstick jokes that can instantly make you laugh. The cgi.... I hate to admit this, is sucks. Why? I thought this is a mega movie where all aspect of the CGI should be polished. It really sucks. Hulk look like an animation from walt disney 3d movie. So unrealistic. I just watch Wrath of Titans a few weeks ago and I already set a standard that hollywood movie should have this Wrath of Titans and Avatar type of graphic or else it look very lame.

The story in this movie is enough for us to wait until the end without sleeping.

Enough said, I don't want to be a spoiler. I gave 4 out of 5 for this movie. It worth paying. It is not bad at all.

Maybe it's the iron man. he is the one who can light up the whole avengers thing. If you can realize after watching this movie, Iron man, hulk and Hawk Eye is enough to beat the hell out of the enemy's ass. Captain America? He is not necessary in this movie. He look like a man on the side in Chinese Kung Fu movie. That sexy girl, i forgot her name..is more necessary as perverted audiences need a sexy girl or else this movie is too gay to watch. Hawk eye is cool (why he did not have his own solo movie?). Hulk, huargh! Iron man..you are shiny, you can fly, you has all the super amazing weapon, you are genius, and you are funny..the movie is all about iron man. Without him, i believe this whole avengers things will suck a lot.

Btw, this is one of the movie that i recommend others to watch. Its nice.