People nowadays tend to be biased on their judgment on movie. They watch they like and criticized other. I tend not to be like them but i too, in my humble opinion, sometime can be a little bias.

However, i could not deny that this movie is one of the best 3D movie out there. How many 3D movie have you seen? How many if them really got that thrill and sensation of watching 3D movie? Less than 5 i believe. This is one of that minority.

If you think this movie is misleading and not based in real fact of history, well i believe twilight, harry potter, avengers, is far more misleading. This if a movie for god sake. And i praised the one who wrote the book cause that person must be very thoughtful. History can be changed no matter what. Thats why we have a different genre of film which i believe called DOCUMENTARY.

Some people said this movie is like making Mahathir as a bomoh or whatever, well if they make that movie in malaysia i am pretty sure it will be the biggest grossing movie ever in malaysia history or it will be banned. And if a bomoh in malaysia fight vampire with a silver knife in 3D action style i maybe will like them a bit. Unfortunately they don't. They fight vampire with i dont1 know, imagination? A verse from holy book? Or just plain stupid thing like waking up from sleep and everything was just a dream. 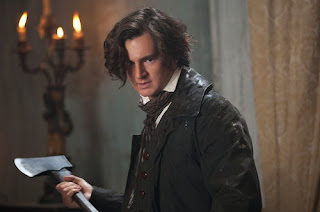 No matter what, in my opinion, this movie may not be the best movie out there, but if you want to watch a real 3D movie this is what it is all about.
Movies