- June 13, 2015
Forgive me if I am being too insensitive here but I need to talk about this matter.

As you all know that Sabah was tragically struck by a 5.9 in magnitude earthquake. It was a disaster, it was terrible, it's sad and I too mourn for Sabah.

However, there are a few thing spread in the mass media and social media that brings out the ugliness of ourselves. Some of us, if not most of us, blame the nudist for the disaster.

I am no supporter for nudist movement. I too disagree about their dress code. For me it was wrong to be nude in a public place not to mention a SACRED places. Mosque, church, temple, and for some races in Sabah, Mount Kinabalu is a sacred places. So this place is not for nudity. Why the hell did they need to take their cloth of in a cold mountain peak. It was fun, maybe, but not that fun now when  those people were arrested by the authority.

Yes, if I were ask whether this people need to be punish or not, I would say according to Law, nude in public still consider wrong and if they were punish, they deserved it.

However, one thing that keeps playing in my mind is, are these people really causing the earthquake?

Some may believe they are but maybe we should not make it in general. A definite answer to everyone. If I, a muslim, said that the earthquake happen because Allah want to show us the sign of doomsday, some people out there who were not a Muslim is free to believe what I want to believe or not. Its not final and I am free to discussion. That was just an example.

Earthquake was caused by a sudden release of energy from the earth crust which cause seismic wave. Land are shaking because of that energy. A movement in earth crust is the cause of that quake. Thus, this should be placed in our mind.

Why blaming the nude should not be the sole answer for the earthquake?

We do not want our next generation to believe or be told the fact that the quake was done by those nude people. It's a wrong message after all. Yes, those who believe that the spirit of the mountain is angry because of that should not be labelled as wrong, but do please remind that there are many out there were not believing the same thing. Everyone has an explanation for it.

If I tell that eclipse happen because of dragon eat it, its what I believe but what about the fact that the moon is blocking the sunlight? I want to tell the truth to my children thus I choose to tell them the right thing.

What happens now is, the media, social media, government and almost the whole Malaysia are fixed believing that the tourist who get naked on the mountain is the reason for all of this disaster.

This mindset will block the nurturing process in our thinking. We will stop thinking on how are we going to prevent this. How are we going to anticipate this? What is the mechanism behind it? Instead we just simply blame the naked people. Those people don't deserved that much publicity.

This wave in social media and news, are reflecting on how poor our mentality in this country. I am not saying believing about the mountain spirit is poor mentality, but something need to be explain scientifically before we jump into conclusion.

I was shocked when someone make this viral in social media 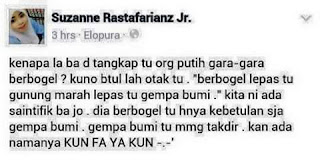 What's wrong with this person? She was partially right and partially wrong. The wrong part is when she said that arresting the nudist is not the right thing to do and calling other 'kuno' (old fashioned).

The right part is when she said the earthquake was not related to those nudist.

Yes she was right on that part. However, try to read all the comment from other Malaysian..

When Malaysian flooding the facebook with the comment like " lets just arrest the nudist and throw them in sea" or "Burn them alive" or "lets kill them and give their body part to be eaten by animal"...

Now let us all think. Who is the uncivilised one here? Those nudist or us the Malaysian?

I would highlight here the key point from what I want to say here:

1. Nudity is wrong, by Law, or by religions or believe.

2. Arresting those nudist and to sentence them guilty after a trial is necessary

4. We should not ever give final conclusion that the earthquake is caused by those nudist. This will give a disturbing fact to our children and the future generation when they ask what had cause the Sabah quake in 2015? (You would not want to answer it was caused by someone who pose naked there)

5. People in social media should think before they type, or else just read the definition of civilise before acting like the opposite of that.

Again, I am very sorry if I am being to insensitive but this thing should be clarify. We do not want to be called stupid monkey living on a tree, so we should not act like one.
Kota Kinabalu putatan platinum apartment