Bersih 4: When People Take It Out To The Street.

It's like the minions fever all over again. Yellow colour is everywhere. I am not sure why yellow colour was chosen, perhaps because of it's striking colour, easily visible to everyone. This is the fourth time Malaysian have to do rally on the street to voice out their critics to the on going corruption and demand for a clean electoral process in Malaysia.

That was supposed to be the agenda in Bersih, multiple NGO combine together and create something like this. When it first created, everyone has a mixed feeling about it. It's the fourth time now with Bersih 4.0, and we still have that kind of feeling. Everything did not change since it was first held.

I am no supporter to street rally, I maybe one of those unpatriotic Malaysian who rather sit at home watching TV. Actually I just had a new baby so going out for a street rally was not an option for me. I may not be a supporter for street rally but I find it necessary to do. People do not just simply held a rally for fun. There must be a cause for it.

I am a big fan of democracy. Living in Malaysia, I am 29 years old now, I can see democracy is fading away. Or maybe it was not there since the beginning. For me, you can express whatever you want as you are free, you are not a slave to anybody. We are living in an independence country, not a dictator or a regime one. So we are supposed to be able to choose whatever we want and how we want it. You want to go shopping, just go. You want to create a traffic jam by going shopping altogether at the same time, you do it. Nobody has the right to stop you unless you cause harm to others.

So, even if I did not march on the street or support any of this thing, but I find it hard to accept what our Government has done to this Bersih kind of activity.

For me, thing is simple. You do something wrong, people angry and go against you, you apologise and step back and stop doing whatever you are doing because you are doing it all wrong.

My reasoning does not work here in this country.

I may not support street rally, but I really see this country going down pretty fast. With corruptiion everywhere (common, don't act like you are innocent. Corruption and bribery is in our blood. Just don't call it bribe, call it donation or something else), I cannot afford to support this current trend and let this country that I love become like any other corrupted country in the world. I want Malaysia to stand proud as a better country, a country free from corruption and bribery.

I want every cent of tax money that I pay being used to make this country a better place for my children to live. Not for the children of politician to enjoy with.

When I read that Gov order all Government servant to not support this kind of activity (activity demanding for a better country), I smiled sarcastically. We pay taxes, we work for the government, and we are supposed to have our right to demand thing.

Nevertheless, I hope that everything went on smoothly for those who take it out to the street.

Remember Gandhi? Non violence will win eventually he said, history told us so.

Make it peaceful. Make Malaysian proud by showing that we are still have our freedom here in this country.

Forget the outcome, we may not get what we want, but at least we try. At least you all try.

I just going to sit back watching the progress and taking care of my newborn daughter. She is very cute. And I am going to call her 'stream of courage'. Because I hope one day, she will have that courage to stand up and be a better person than me. 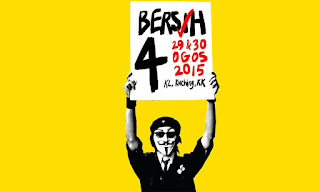 I just read that Our Prime Minister was saying those who join Bersih 4 are not patriotic... Well, I thought it was patriotic. Now I know that I was not. I thought demanding for a better Malaysia is patriotic. I guess I am wrong. He said so. Should we support corruption now?
1malaysia Politics