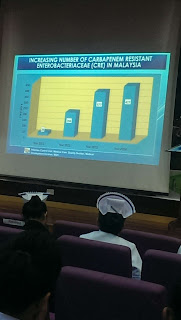 I would eagerly like to talk about how nice my trip with my family to the beach today, or talk about how wonderful my morning waking up on a sandy beach with the sound of the wave from the ocean. No, I have to highlight this topic because it seem that we are going to face it real soon.

Antibiotic apocalypse, is what they called it. Since this week was the antibiotic awareness week through out many region in this world, I sense a little bit of responsibility to inform everyone about the 'doomsday' that will start very soon.

As a medical officer myself, having my fair share of experience working in district posting, I have to admit that once in a while we did prescribe antibiotic to those who does not need it.  We were thought in medical school about the usage of antibiotic, about the harm it will cause if you freely prescribe it to anyone, yet we did the same mistake once in a while. Once in a while is dangerous no matter how innocent that statement was. Yes, some patient did. While in the ward, don't lie to me, even a consultant would start a high end antibiotic to a patient, always giving a statement "we should hit them hard" referring them to the bacteria that cause the infection.

Now, what we did, came back to us. We are running out of antibiotics.

Prescribing to those who does not need it.

Using the antibiotic for a very long time.

These are all the causes for antibiotic resistant. Almost all of our antibiotic today were somehow overcome by the superbug which are resistant to them. By 2050, we may not able to treat a simple chest infection because we don't have antibiotic to do so.

By that time, humanity will eventually being wipe off from the surface of the earth. For thousand of years, we were fighting bacteria and infection and by the last few decade, we were winning the war, however we became greedy, we want to kill every antibiotic, but we forgot Darwin's theory on Struggle for existence. Now the bacteria that struggle to survive, evolve and became resistant to our 'weapon' now we can't fight them back. We were heading towards that apocalypse era.

I would not describe in details on the theoretical part of antibiotic resistant, just to make you all understand that by using antibiotic, you kill all the bacteria but a few of them were actually resistant to that antibiotic. This group of bacteria will lost their competition to live as all their other bacteria were already dead by the antibiotic. They multiply, colonise, became the new infection that you could not fight anymore.

This mechanism is pretty simple yet even those who graduate from medical school seem to forget about it.

Who are the one who need to be blame? Well, doctors, patients, just admit it, its humanity fault. We do not need to blame anyone. We should focus on how can we fix this mess.

Well, we just can't. We are at the end of the war, just realising our strategy actually did not work, plus it was a wrong way after all. We will not fix this mess.

But what we can do is, we should, as usual, to admit that this problem is real. Then, guidelines and law should be implemented on antibiotic usage. Restriction should be made. A team should be created in every hospital to monitor antibiotic use. There were a hundreds thing that hospital are doing right now to reduce the damage from what we will face later when the time has come.

For the public, all the people out there, first of all, we should stop thinking that antibiotic is everything. We should not think that only antibiotic can cure us. A common cough and cold usually cause by virus do not need to be treated with antibiotics. Stop buying antibiotic and use them like candy. Pharmacy store should not sell antibiotic without doctors prescription.

We can do a hundred thing in our hospital, health ministry and agency, but if public still have the antibiotic mentality, then our effort will become such a waste.

Prevention is the better than cure.


As said by an ID physician in my hospital, we (the humanity) will eventually survive this apocalypse, but most of us will not. The one who survive will be those who evolved to become immune to the infection. Well from 10 000, maybe one will survived.

I imagine that era as a rebooting phase of the earth system. Less human, but with that painful incident, they who survive, would eventually realise the mistake and maybe will win the battle again in the future. Are we among them who will survive? Most likely not. Well most of us will not. Earth would be a better place then.