- November 14, 2015
So I was back in Labuan last week to celebrate my daughter birthday party along with aqiqah and 'Cukur Jambul" ceremony for my second daughter. This time, I was determined to taste some of the newly open restaurant in Labuan.

After a bit of discussion (basically just randomly picked), we chose Win Cafe which is located at Ground Floor Financial Park. This place previously was occupied by..some shops ( I forgot what shop). Located in front of Aifa Electrical shops.

Environment wise, this place provide a good old rustic but classy looking eating place. Calm, clean, and all the worker looked professional. When you walk in, you feel like you are going into a high class fancy restaurant.

Nevertheless, the restaurant provide affordable and variety of food. Ranging from western to local cuisine. Food prices almost all, are below RM20. The steak was priced based on how many gram of beef do you want. That was cool.

There were buffet lunch promotion where you pay RM12 to eat as much as you can from their limited chicken and fish dishes with unlimited rice and plain soup. Did not try that though.

We, instead, choose to eat ala carte menu. 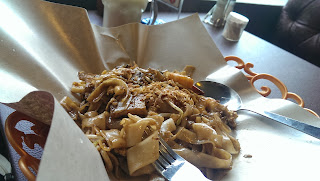 My wife ordered Char Kueh Teow with Clam. The odd thing was, there were no clam inside it. Only prawn, my wife said that to me after she finished eating. The taste was so so. No special thing to brag about. 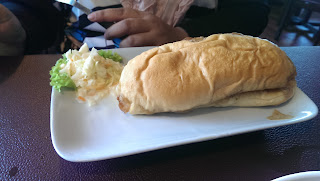 My sister in the other hand went for an Oblong beef burger. The beef was hand made. The thing about this burger was the patty taste. It taste sweet, vinegary sour, smell like old pickles. It was Worchestershire sauce that make it taste like that, I guess. My sister did not like it. But I think it's okay for those who are used to that kind of taste. 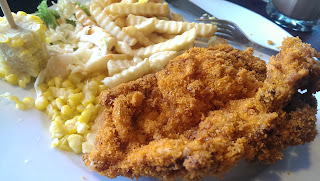 I ordered Maryland chicken chop. The chicken was big (but actually the crusted flour make it look big). Nothing special about it. It was served with a kind of sauce which I think also taste like Worchestershire or Hp sauce. Sour, black pepper taste sauce. 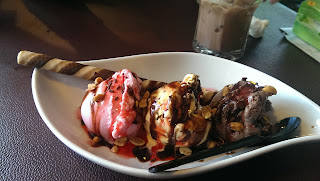 Our desert turn out well. Nothing goes wrong with ice cream, chocolate, caramel, and peanuts.

In conclusion, this place was ambitious. I praised that. It tries to bring an affordable western and asian cuisine in one place. The environment was nice, the waiter and waitress were polite. Variety of menu. Good proportion of food. However, I think they need to enhance their flavour in every meal. It was not enough, serving a chicken chop, for example, that look like one but does not taste like one. I am a fan of chicken chop and I can tell that there were a lot of better chicken chop than this place. I think they need to turn down a bit on their Worchestershire or Hp sauce and just try to make it as simple as possible but taste great.

I give this place 2.5/5 in rating. For their effort, I would still recommend this place to others and perhaps will went there again when I am in Labuan.