I was surpirsed when Labuan was the only remaining federal territory that became opposition during last election.

However, as expected, by many Labuanese / Labuanite  (Labuan people whatever your called them), BN will not be relevant anymore in that island. This is due to the most reason of people voting for BN  because they were afraid of Labuan becoming an opposition state. Labuan was pretty comfortable under BN leadership. Not many, however, realized that government can be changed. As a Labuanite myself working outside this lovely island, I can see how big changes were approaching before the election. I have told my family that changes going to happen this year and Labuan might end up being in the opposition after all by supporting the government.

But, Labuan people were very contained. They made their choice. And it happen.

The weird part is, Sabah has fallen to the opposition forming a new government, and on the other side, peninsular also has a new government. Sarawak made a drastic move by quitting BN and became another opposition state after the election....

Left Labuan...a small island, a federal territory, with its neighbor Sabah which is now ruled by Warisan,and the next closest neighbor, Sarawak,which also distanced themselves from BN.

Trying to reach to the other side was hard then, because obviously Labuan is a federal territory, but the other side now ruled by Pakatan Harapan. Labuan felt like an unwanted child who lost both her parent.

I do not know where will the political landscape of Labuan will go.....

Not to my surprise, Labuan MP, suddenly follows the trend of jumping party. Now joining Warisan.


I have a mixed feeling on this.

1. I was happy because Labuan now has a new brother that can keep her safe which is Sabah under Warisan party. Labuan will also be considered as part of government and not opposition.

2. I was angry because more than half of Labuan people did not vote for BN, yet BN win, and now with him joining Warisan, does it fair for the other candidates who really gained big momentum of  support during the election?

3. I was surprised because I thought even under BN party, Labuan MP would fight for the sake of Labuan people no matter what happen. Why would he jump? Will he jump again in the future? Democracy would be insignificant if people keep doing this.

Those who support Warisan have to admit defeat during last election. But now, should Warisan supporter jump and rejoice in happiness because Labuan now controlled by Warisan? Was he not  the one who people were trying to put down during last election?

However, let bygone be bygone. Labuan people have learned their lesson on casting vote using intellectual rather than emotion. And those BN who humiliated Warisan now should look upon themselves and accept that changes are necessary, not an option.

No matter what happen, the current Labuan MP should fight hard for Labuan people  under Warisan party. All is well.

( Should someone step down their position first and let democracy choose whether he could be accepted or not in the new party? This is a question that many will ask after this. To let go of the power before rakyat or to let go rakyat to remain in power?). 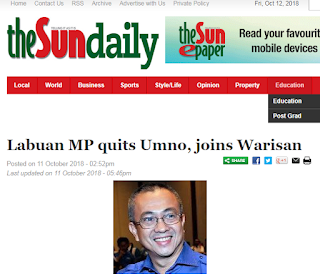