Malaysia lifting up MCO 'lock-down'?: A right but dangerous decision.

It was announced last Friday that Malaysia will be lifting up the Movement Control Order (MCO) or Restriction Movement Order (RMO) to prevent this country's economy from further collapsing into dust. Many netizens did not agree on the decision and start petitioning for the lift to be canceled immediately.

I believe it was not the best move by the government but it is necessary. There is no point in prolonging this 'lock-down' measure if we know that the virus will not be easily removed or eliminated. The government should have opened up the economy earlier, but to some, this is rather too radical and dangerous. Many forget the reason for the order to be implemented - to relieve the burden of our healthcare system.

When the tabligh cluster emerges somewhere in early March, it was a necessary move to implement the lockdown due to our late containment of the attendees, and the huge number of people attending that event. There were no other measures as effective as the movement control order.

As time goes, the cluster was well controlled and the emerging new clusters were not as much as the tabligh cluster. The MCO should have been gradually removed at that point in time. However, I believe, we began to become too optimistic around that time. We started to envision the zero numbers to be announced by the Director-General of Health. We dream about a day that we all can go out shopping at the mall, eat with our friends, or go to a party with no restriction. This optimism brought us to today, early May, still locked in our house.

I have written before that we could not win this battle against COVID-19. We are supposed to prepare to live the new norm earlier, but we did not. We were so immersed in our optimistic dream to end this pandemic with just staying at home forever.

I, too, have a conflicting opinion about ending the MCO. As a doctor, I would definitely support continuing the lock-down forever so that the virus would be eradicated in a matter of 1-2 years. As an investor, I was scared to look at all the negative indicators of our economy. I could calm myself by the promise of increasing GDP and a positive rebound which may happen next year, but I do think that another week of MCO will hurt our economy so badly.

Health is not just about medicine. It's beyond that. Having good health, with no job and money would not be considered as good health after all. So, in this issue, we have to balance everything. We have to make sure people have food on their tables to keep alive, to keep them in good health. The healthcare system also will not pay for itself.

I believe, government did the right thing in lifting the MCO. H\owever, they should have prepared the policy on how to live in the new norm earlier. It seems that everything was in a rush on today's government. They have almost a month to prepare for it but end up announcing in Friday for the lifting on Monday and the standard operating procedures (SOP) were just rolled out in Saturday and Sunday via social media platform (telegram). Have all the sectors that will be opened up in Monday aware of the SOP?

In the end, it is just like releasing a group of sheep from a barn into a river without teaching them how to swim or preparing a boat to keep them afloat.

It will be chaotic.


We should keep in mind that we are now living in the new norm. After COVID era. If we feel it is nor necessary, just stay at home. Much safer than drowning with the other sheep in the river. 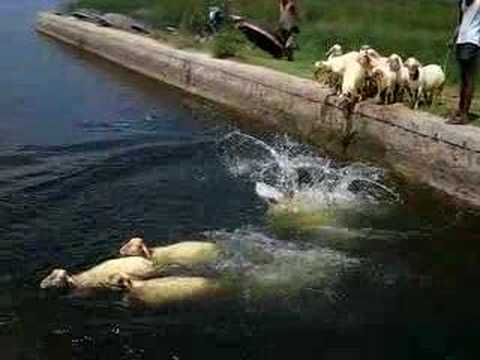 Apparently, sheep can swim.... I think we are all going to be ok.